Yes this weekend we finished plumbing in the waste tank.

I am very happy that if we had the boat in the water the head would be fully functional. 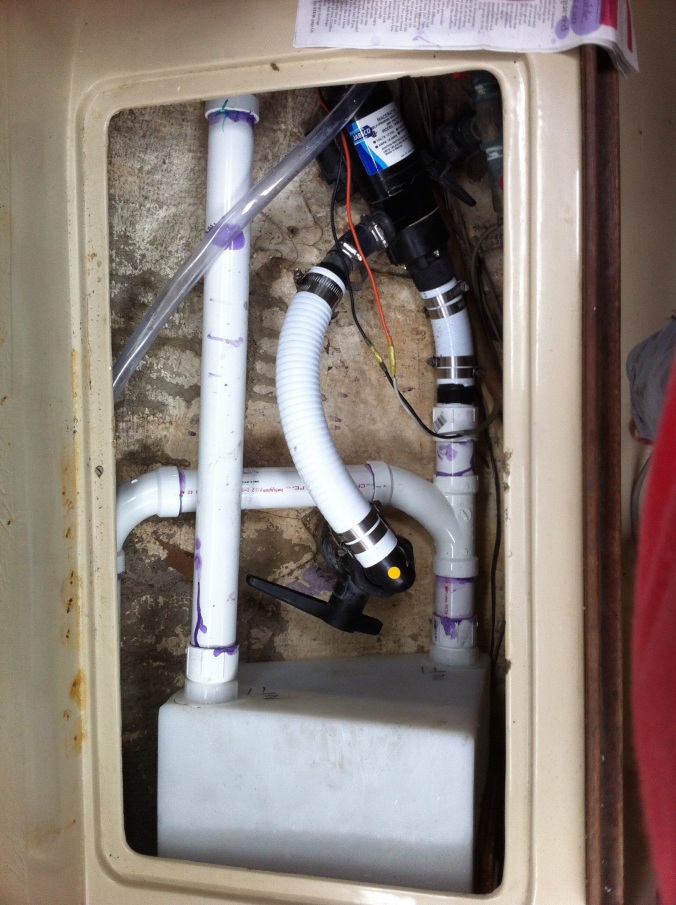 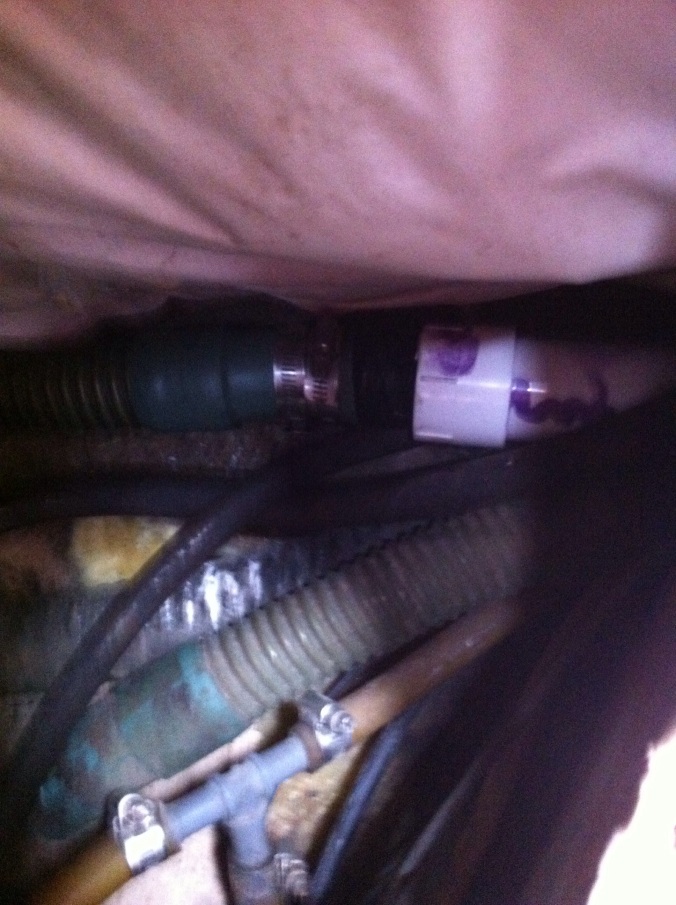 I still have to glass in a block to mount the pump on but she does work just fine.

The only items reused in the waste system are 4 feet of hose from the deck fitting to under the icebox ( may replace) and the toilet bowl itself.

To celebrate the completion of the waste system I arranged for a flyby of the GoodYear Blimp.

In the second photo you can see the drawers I had to remove to access the plumbing under the icebox.

Ok, Lori just told me the blimp may have been in town for the Nascar Races in Daytona. I still think it was here to celebrate my poo progress.

Another gorgeous weekend here in Florida is now in the past.

Two complete coats of Gloss paint have now been applied to the Bell. 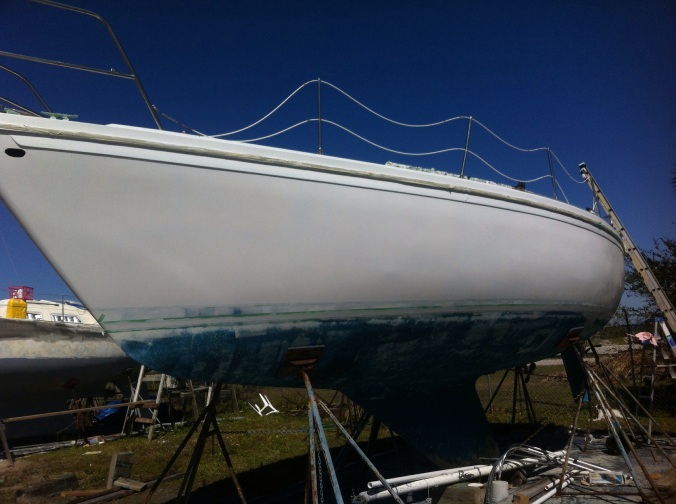 For here are the tools of my discontent. 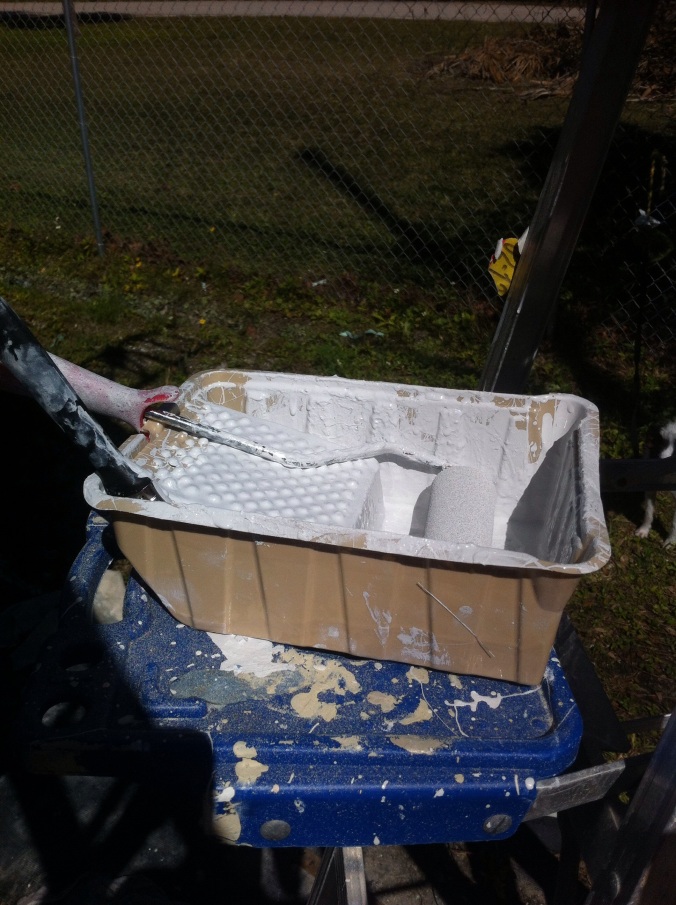 And the setting for my labors.

You will note that these post have taken on a basically repetitive nature. They have,, for it seems to be lot of a low budget boat owner to paint endlessly.

On our next visit we will decide if more work (coats) is in the offing or will we move on to stripes and stencils.

This weekend we had our first visitors to the Bell. I enlisted the aid of one of them in plumbing out the waste water system. As of now the 90% of the rough in and pcv cuts are done.

I wish to epoxy in a block to mount the poo pump on and then paint the compartments. After that we will be gluing the plumbing together and be done with the rebuild of the waste system.

Then it will be onward to Motor related work.

I leave you with my photographic opus, a piece I title

Paint on the dinghy 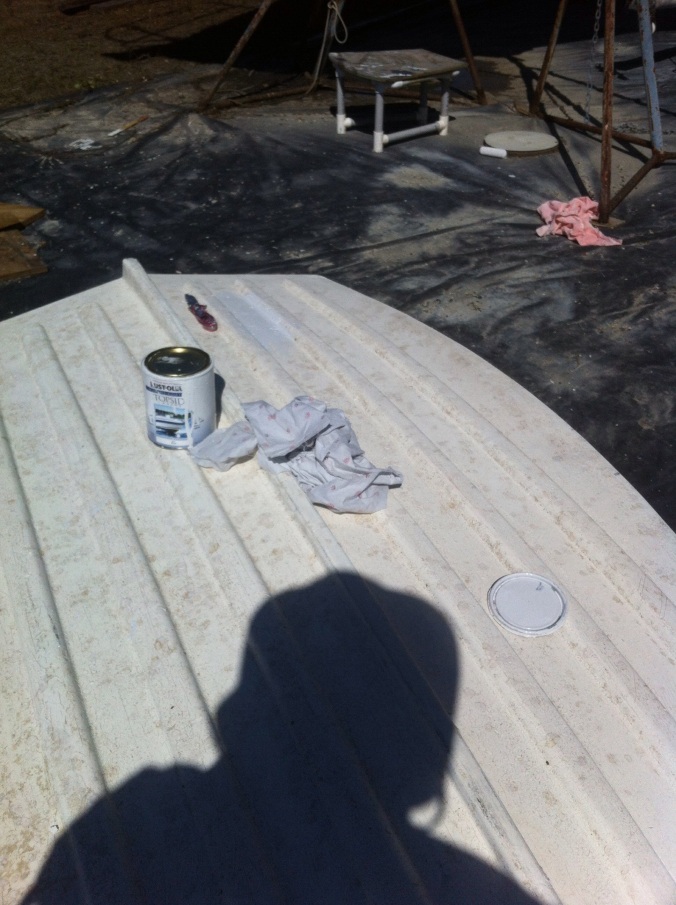 I have not written much about our continuing adventure with the Atomic 4 engine.

It currently sits in the garage on a pallet. I try to put a few hours of work into it every week and we are making progress.

First thing I did was remove the plugs and put a spoonful of oil down each cylinder and let it sit. I then cranked the motor by hand pumping about a gallon only clean oil thru it.

After that I turned her over with the starter and no plugs. She did not have fire.

Replaced the ignition coil and cleaned the points. Lubed the advance and now we have spark.

After achieving spark we have moved on to rehabbing the water jacket. I removed the alternator and starter and after soaking the bolts with PB Blaster I pulled the water jacket cover. 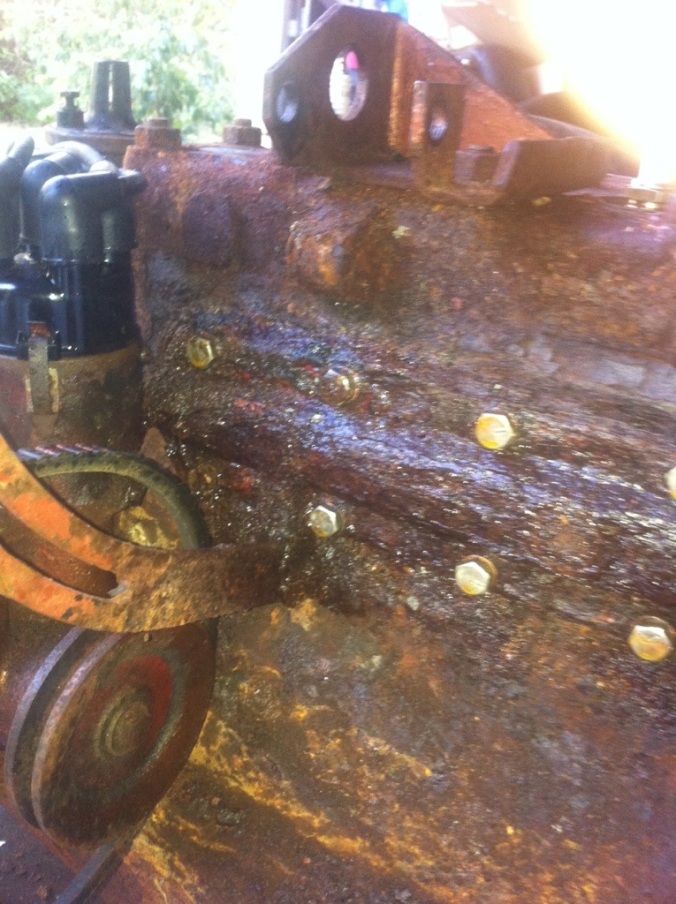 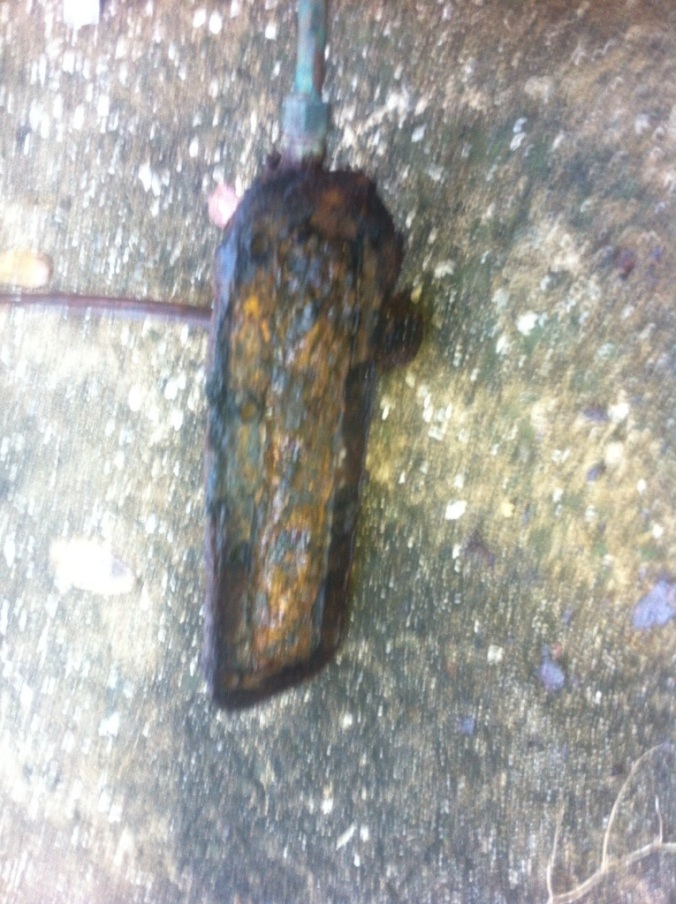 To say there was a tad bit of corrosion would not be accurate. After cleaning up the motor with my angle grinder I realized I needed some parts.

I now have a new stainless steal cover, alternator tensioning arm, repair studs and various other parts. I ordered them from Moyer Marine, who specialize in the A4.

They also have a very helpful public forum.

Up next, cleaning out the water jacket and then rebuilding the side of the block with epoxy.

After the water jacket is revived I hope to clean the carburetor fire up the motor for the first time.

Then it is onto building a fresh water cooling system, control panel, wire harness and then installing the mess in the boat.

We did make it out to the Bell last weekend. Lori has been under the weather so I was left to do the work while she rested.

I did manage to sand the entire freeboard. Then washed and taped it.

Finished painting the semi-gloss paint above the rub rail and did get half of the first coat of gloss on the port side. By the about 2 pm on Sunday I called it quits. The step ladder had won and my calves were paying the price.

A good workout for sure.

The End of the Line

I end with a few photos of a boat that was listed on Craigslist for about the same price as ours when we bought it. It was not as lucky as ours was and it appears that she was purchased for the lead in its keel.

They are chopping her up with a Sawzall. Kinda sad.