A lot of first times.

Sometimes things do not go as planned but by sitting back and enjoying the ride despite the bumps amazing things can happen. 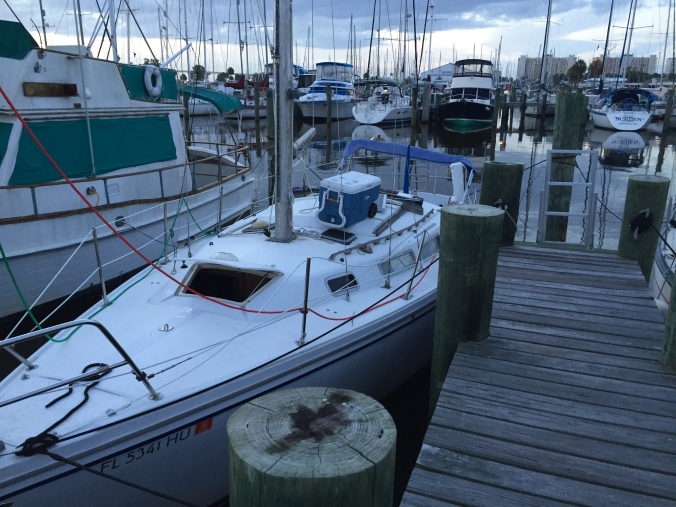 Cooler on board, all stocked up.

Saturday night we arrived at the boat late, after 11pm, having had a good time during the day around the greater metro Sanford area.  We brought out 5 gallons of ice water in a cask and a cooler of ice for baby bottles, hot dogs on the grill and egg wraps for breakfast.

When morning rolled around we were up with the sun for breakfast and coffee.  I walked over to the marina showers to bath.  I appears they put a new auto closer on the door because as I walked in the door slammed shut catching my flip flop heal as I step through, snap goes the flop and now I am without footwear for the day. Crazy. 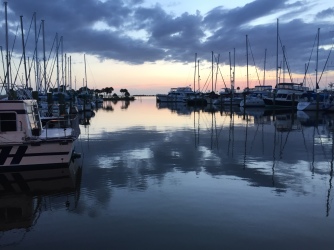 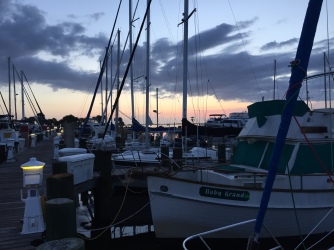 As there was no wind we busied ourselves around the boat doing housekeeping.  Small things like cleaning up my mess from installing the chart plotter and replacing a frayed control line on the traveler.   I also ran a temporary antenna for the AIS and put the mainsail on the boom.

We had not run the motor in a few months but she started right up and we were off.  As everyone was in the cockpit on the way out of the marina I looked down to see puff of smoke come from the engine hatch.  Looking at the temp and rpm gauge all was well so I went below but was unable to ID the source of the puff, pretty odd.

As we motored out of the marina we were too close to the north side of the channel near the breakwater,   we found that there is some muddy shoaling in that spot as we ran aground.   Luck for us we were only going 2 knots and by turning the rudder hard to starboard we rotated on the keel and just drove off the bar.  Our first ever grounding of Lori Bell. 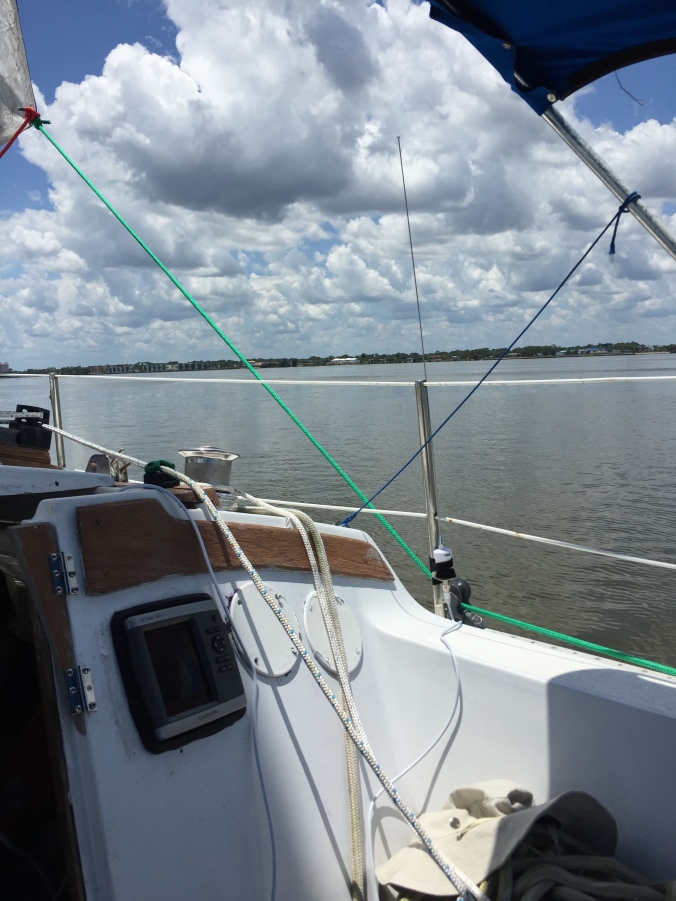 Very light wind to start, you can see the AIS antenna attached to the stanchion with velcro.

I have to say the AIS is pretty nice.  Sure we could do without having boat names and tracks on the chart plotter but when one is bobbing along at 1 knot it is interesting stuff.

Being that there was very little wind we cut the motor and set the sails and had ample time to tune them,  for the first two hours we maxed out at about 1.5 knots. 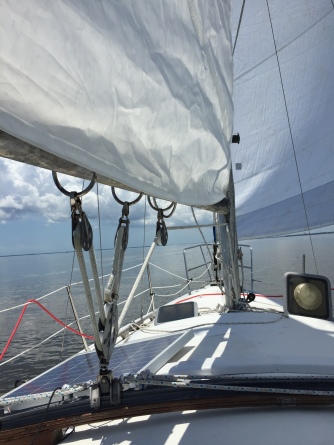 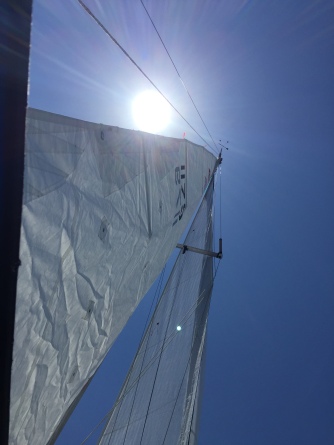 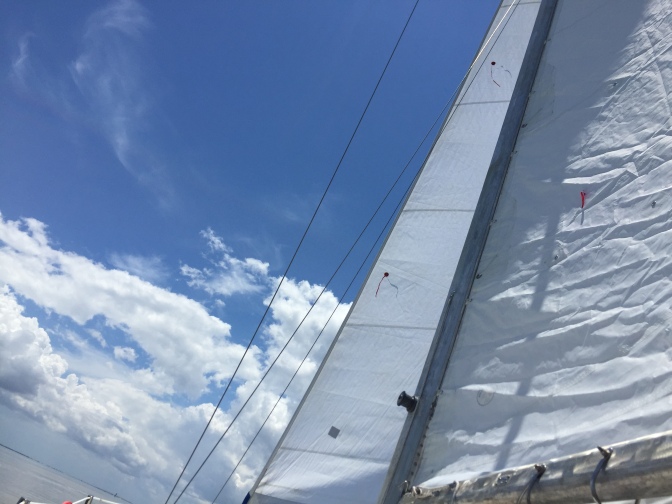 With not much going on it was safe for movement about the cabin. 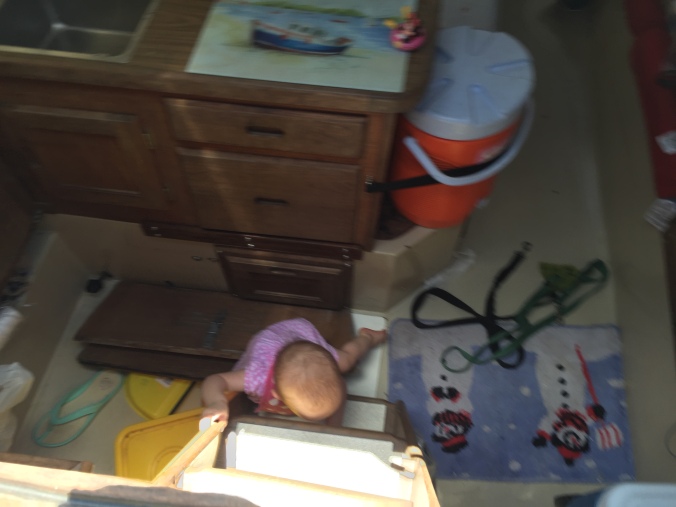 Feel free to move about the cabin.

After 1 pm the wind started to slowly rise.  Coming out of the ESE  we were sailing to weather, close hauled.  We had to work the jib sheets and cars as well as the traveler to keep from stalling.   It was a good learning experience and I must say our  mid boom traveler even though curved is much nicer than the end boom rig on the Clew was.

Things were getting more interesting and a cooling breeze was finally to be had Lori put Elizabeth in her vest and helped sail the boat.    This was her first time sailing the Bell and both of our first time under full sail on her.

As we a turned about to head in for the day the wind picked up to about 15 knots and shifted to out of the East with small white caps on the water. We were on a broad reach home.

Lori with baby on her lap worked the helm and I managed the sails.  We were going 5.5 to 6 knots with about 15 degrees of heal. Very fun.

The wind continued to rise we went to about 20+ degrees and had the port rail in the water. Moving along nicely we finally had to let go of the main sheet and depower the boat.

The wind was now a bit too strong (high teens to low 20s) we needed to add a reef to the main but I have not yet set up for that.  I have the line but want to practice in the slip before attempting it on the deck of a moving boat.     We decided to drop the main and reef the jib.   This slowed things down to about 4 knots but we were almost home by this point and the wind was getting a bit confused before starting to ease down to 10 knots again.

During this bit we ran through a pod of Dolphins. 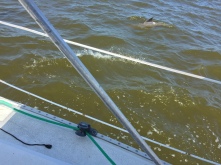 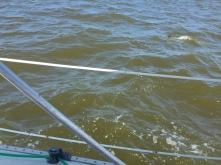 With the favorable winds the trip back went much faster than the trip out and before we knew it we had to fire up the motor and enter the marina, I noticed the was no charge voltage on my voltage gauge.

After parking the boat I did an inspection of the motor and found that we had thrown/lost  a alternator belt.  It was burnt in half,  my guess is bad bearings on our 3rd alternator.  I will need to do some work and see if I can rebuild one good one out of the 3 junkers we have. Thankfully we have solar and the batteries never went below 12.45 even with 2 fans running for about 24 hours and all our electronics and 2 engine starts.  I am pretty happy for the redundancy.

We also finally got to use our new sail cover for our new main. 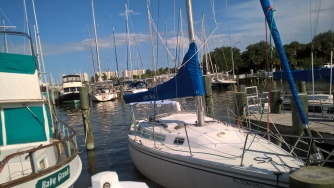 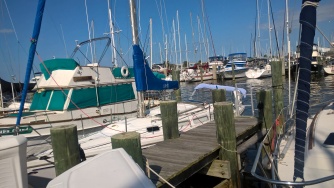 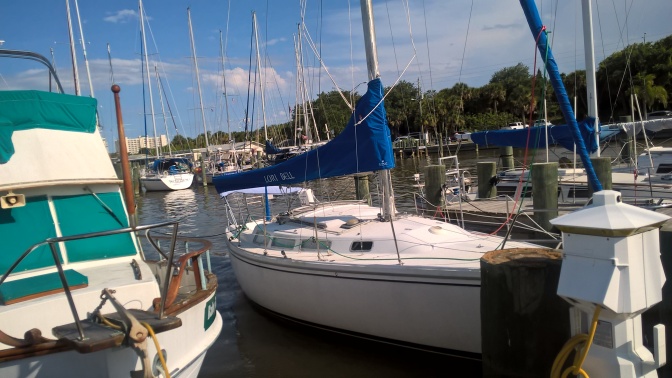 If you look close you can see it has the boats name on it, sweet.

Today Lori and Elizabeth attended a ladies banquette that I could not attend.  I had a few unsupervised hours so decide to take a quick spin out to the boat and see how much damage I could do. 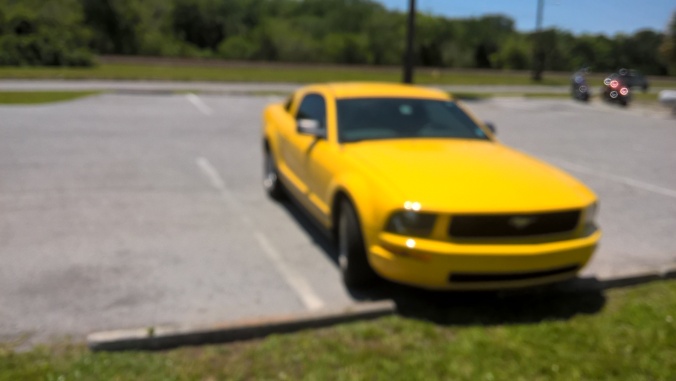 I drove Lori’s sled out, last time I did this I found the boat had been hit by lightning. Had my fingers crossed this trip.

I decided to install the Garmin chart plotter into the bulkhead.  It is one of the last big electrical jobs to do and a bit messy. 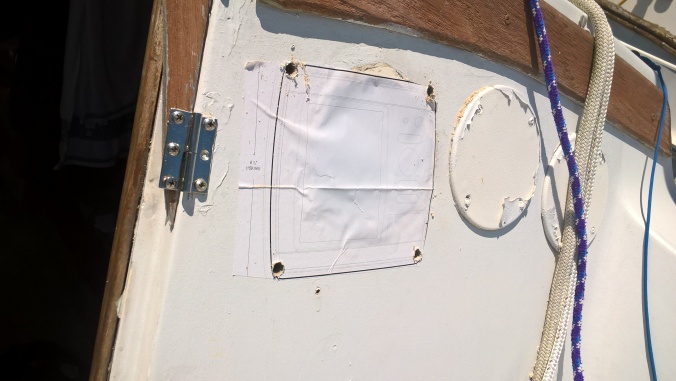 Template supplied with the Garmin flush mount kit for our plotter.

The kit comes 2 decals.  Nice that you really only need one and it allows a fudge factor.  Here it is with the corners already drilled. 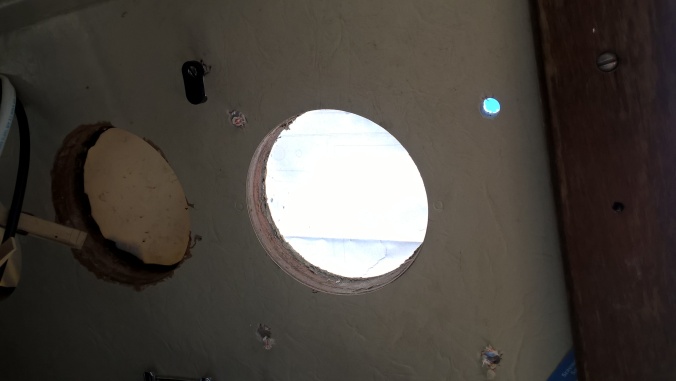 Inside of the location were the Garmin is going. These instruments were pitched a few years back as they were full of water and basically trash. I put plastic caps over the holes.

After the corners were drilled I went after it with a jig saw.  Of note is I cut inside the line and not on it across the top. A mistake as it seems the top rubber gasket is not seating well. I will have to go the edge with a grinder to get the 1/16″ I think I need for a better seal. 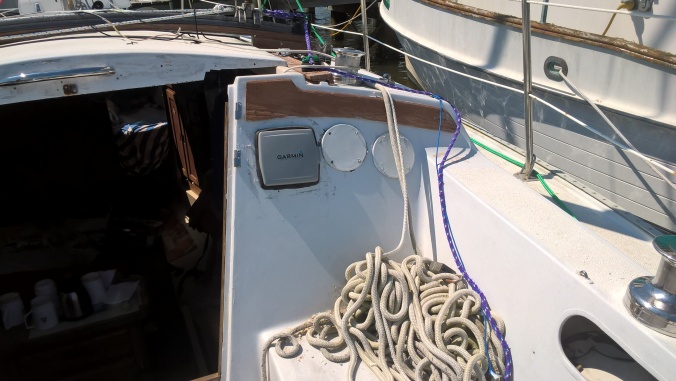 Here is the plotter installed with dust/weather cover.

I then was able to dress up the wiring inside to be less of a rats nest. 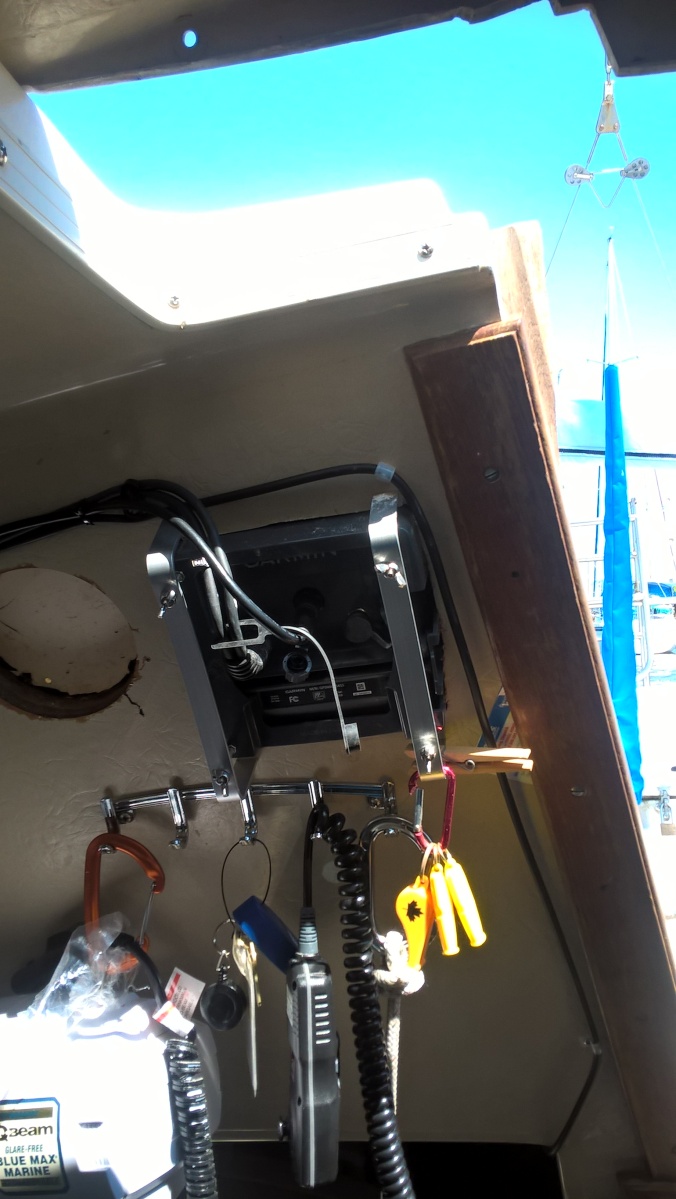 Garmin inside bows that keep the mount and unit attached to the boat. 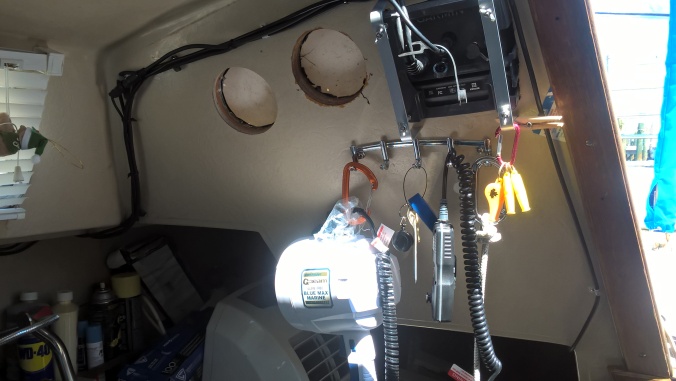 Well, that is it for this week,  Happy Mothers day. 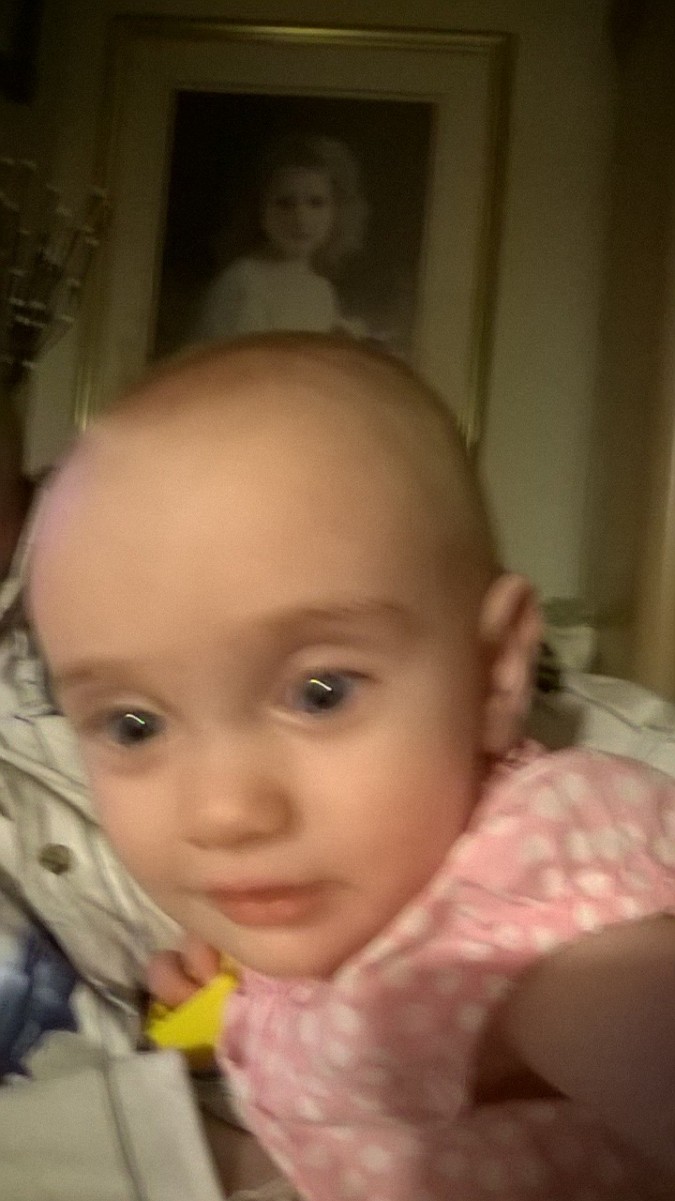 Brought to you by babies first selfie…