Saturday  found us traveling to the Ponce Inlet park enjoying a nice afternoon.  On the way Elizabeth dozed off in her car seat so we pulled into a beach access point that gave us a good view.   As we watched a wedding party was rapping up a photo shoot and leaving.

Lizzy started to come to so we proceeded on to the park and as we were enjoying the amusements we saw the same wedding party park near our car and walked past us on their way to a local restaurant.  We told them congratulations and they said it was a double wedding, mother and daughter were both brides.   Sorry no photos. 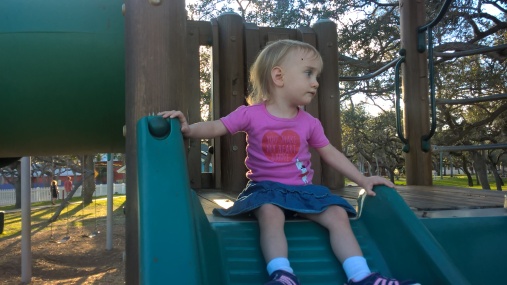 After the park we checked in at Boondocks, Saturday night so we waited the required hour in the lounge watching reruns on tv as the dogs stayed on the boat.

Sunday  morning I had jiffy pop for breakfast because, well just because we could.  No worries we augmented Elizabeths diet with proper food.

I really need to replace the cooling pump and change the oil on the motor but instead opted to wire up the tiller pilot.   Sure this makes no sense but for the fact I really wanted to install the pilot.

So down into the port side sail locker I went, first removing the old tiller pilots power plug and installing a the new.

I ran the wire and as I did took the opportunity to dress up the wire runs in the locker as well as rebed the loose stern pulpit base.  It turned out I could only remove one of  three bolt on the pulpit base due to corrosion.  After much sparing of penetrating lube I was still unable to remove the bolts.  We will have to bring the grinder on the next visit and cut the bolts off.

As I worked Lizzy was enjoying climbing up the companionway and checking on my progress.

Lori did get Elizabeth in her vest and she sat in the cockpit watching me work.  This included picking up random tools that I would silently pray she would not decide to pitch over the side.

As it is the only thing that fell off the boat this weekend was Abby the dog, she swam to shore and then promptly enjoyed a cold bath on the dock giving be Lori.

Back to the subject of the tiller pilot, sort of,  as I pulled the wire into the Navigation station I had to take apart drawer and access hatches we seldom access.   Under the quarter berth is the fresh water filter that had a hose part from the fitting.  I took the hose and trimmed it back a bit and on examination of the found it had literally rotted in half, causing the hose to come loose.  I replaced it and we now have pressurized water again. Win, we can wash our hands in the head.

So I wired the pilot up and it works,  now we have to do a sea trial and get it linked into the chart plotter.

Also this weekend I replaced the compass cover and installed some line holders in the cockpit. 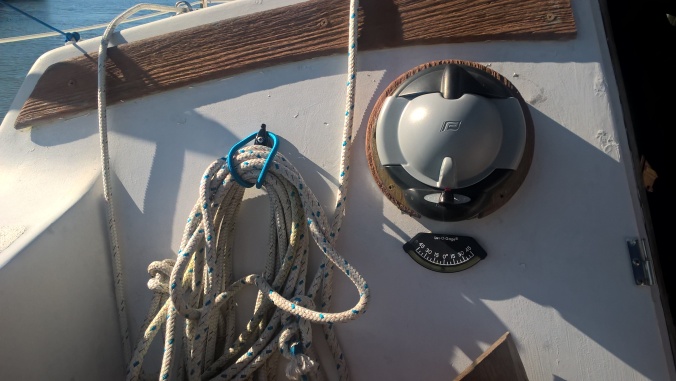 Line holder and compass cover. The good thing is the shock cord on the line holder is replaceable.

We actually got a lot of things sorted this weekend and had a good time.

Hopefully I will get around to fixing the motor and sorting out the anchor next trip out.